Romans 13:14 Rather, clothe yourselves with the Lord Jesus Christ, and do not think about how to gratify the desires of the sinful nature. 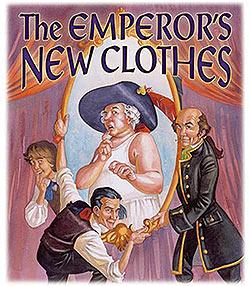 In 1837, author Hans Christian Andersen wrote a short story about an emperor who was way too into his clothes.  As the story goes, two con artists create a new special suit for the emperor.  This suit is a beautiful, colorful piece. However, it is invisible to everyone who is incompetent or ignorant.  When the suit is finished, they put it on the emperor, who can’t see it.  The problem is he doesn’t want to be exposed as incompetent so he pretends to see the suit.  As the story goes, it turns out that there is really no suit at all.  And to make matters worse, the emperor just went out in front of the entire city in his undies.  Oops!

Going out in public without clothes on isn’t something that is widely accepted  here in America.  Getting dressed is one of those things that we are expected to do.  You are supposed to show up to work in a suit, not a birthday suit.  I think we all know that, so we wouldn’t ever consider leaving the house without clothes on.  Our common sense would likely prevent us from making the same mistake that the emperor made.  No, we wouldn’t go out naked.

But we would go out naked spiritually.  We rush through our mornings and never bother getting dressed.  We don’t think about getting covered.  And we are left exposed to the elements of the world.  We are left exposed to just about anything that comes our way.  Here in Romans 13:14, Paul instructs us to get dressed.  He says to clothe ourselves with the Lord Jesus Christ. (The NIV is actually quite accurate in this translation of the greek word for “clothe”.)   We are to put Him on each day, not wait until crisis and realize we need Him.  So I would suggest that each morning when you are getting dressed, that you also get dressed.  Find out what  a difference it will make in your day!

One thought on “The Emperor’s New Clothes”