Genesis 29:22-25  22 So Laban brought together all the people of the place and gave a feast. 23 But when evening came, he took his daughter Leah and gave her to Jacob, and Jacob lay with her. 24 And Laban gave his servant girl Zilpah to his daughter as her maidservant.  25 When morning came, there was Leah! So Jacob said to Laban, “What is this you have done to me? I served you for Rachel, didn’t I? Why have you deceived me?”

Most of us have zipped in front of someone in traffic.  We don’t, however, like it when someone does the same to us.  We have said an unkind word but dislike unkind words said to us.  We have lied to someone and become angry when someone lied to us.  It feels a little different when we do it, doesn’t it?  When we get a taste of our medicine, we realize that maybe it isn’t such a good thing after all.

Jacob was a trickster; he was a deceiver.  He tricked his father into giving him the family blessing.  His setup was elaborate and full of deceit.  Yet he asks uncle Laban this question: “Why have you deceived me?”  Hmmm… you don’t like being deceived, huh, Jacob?  It seemed to suit your life well, but it didn’t taste so good when it was served to you. Jacob got a taste of his own medicine… and he didn’t like it.

I wonder if we act the same way in our lives.  I wonder if we hold others to a standard that we don’t hold ourselves to.  I wonder if we easily complete our own atrocities all while judging others for theirs.  We tell little white lies yet discipline our children when they do the same.  We show up late to places but get irritated when others do the same.  It’s time we begin to hold ourselves to our own standards and allow others to do the same in their own lives.  We must trust that God will work in the lives of others.  And while we wait for Him to do just that, we ought to ask Him to work in our own.

*Reflect today on the places where you are doing what Jacob did… questioning others for the very things you do.  (ouch)

Genesis 28:8-9 Esau then realized how displeasing the Canaanite women were to his father Isaac; so he went to Ishmael and married Mahalath, the sister of Nebaioth and daughter of Ishmael son of Abraham, in addition to the wives he already had. 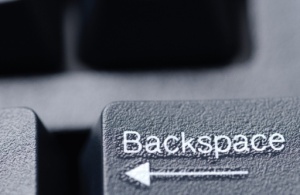 Everyone messes up.  Sometimes we mess up on accident and sometimes on purpose.  There are those times when we didn’t know any better, but we were still wrong. For example, getting caught going 50mph in a 35 when you never saw the speed limit sign would be a mess up that was on accident.  If you are going 100mph, you are going to have a hard time convincing the officer it was a mistake.  You blew it, just admit it.

Sometimes we think can do something right to fix what was wrong.  And we can fix some of the damage. Other times, however, no amount of fixing will do the job.  You’ve heard the expression that 3 wrongs don’t make a right (which is odd because 3 lefts certainly do).  I would say that in the same way, 3 rights don’t fix a wrong.  A week’s worth of being a good person doesn’t repair a lifetime of poor choices.

Esau had a startling realization: he had married the wrong women.  The word on the street was that his dad didn’t approve of Canaanite women, which apparently he had married.  So in order to remedy the situation, he went out and found an additional wife.  She was a good wife, a good choice, the right kind apparently.  This will make dad proud.  Now I have the right kind of wife.  Just one question, Esau… what about your other wives?  How does marrying one right wife change the fact that you are married to a handful of wrong ones?  Short answer – it doesn’t.

Placing a drop of clean water in contaminated water doesn’t make it drinkable.  Doing one right thing doesn’t negate the 3 previous wrong things.  But many people approach God in this way.  They try to clean up their act before going to Him.  They make a point to be good the day before church.  Maybe He won’t notice all the other days.  We try to so hard, but we need to realize that all these right things don’t fix the wrong things.  There’s just one solution: Jesus. Jesus fixed all the wrong things.  He did for us what we couldn’t do for ourselves.   He made right what we had made wrong. He is our saviour, our fixer; He is all that is right.

*Are you trying to fix all your wrong things on your own?  Turn it over to Jesus and let Him make it right.

Genesis 27:41 Esau held a grudge against Jacob because of the blessing his father had given him. He said to himself, “The days of mourning for my father are near; then I will kill my brother Jacob.”

I’m gonna kill him.  You may have uttered those words before, not really meaning it.  You were mad, flat out ticked off.  How could he have done that?  He totally did you did you in.  The anger rises up in you and you just want to make him pay.  You aren’t really going to kill him, but revenge would sure be nice.  Those are some pretty strong feelings and they probably didn’t arrive overnight.  If you feel that strongly about someone, they have probably been riding your nerves for quite some time.

Esau was mad, too.  When he said, “I’m gonna kill him,” he meant it. It says in the text that Esau held a grudge against Jacob. I don’t think that this grudge was something new… I think he was still mad about the last time Jacob cheated him.  Remember the nice warm stew?  “Oh that stupid stew!  I sold my birthright over some stinking stew!”  And that stew had Esau stewing for who knows how long.  So when this happened, it was just too much.  The grudge had festered in his heart and murder was on his lips.

That’s what happens when we let things go unresolved in our hearts.  Frustration turns to anger, unresolved anger turns into a grudge, and that grudge gets us thinking crazy thoughts.  We imagine that jerk driving off a cliff or something.  Paul says in 1 Corinthians 2, “But we have the mind of Christ.”  The mind of Christ is one that does not let things fester.  It makes room for grace and forgives.  It turns anger over to God and lets Him be the judge.  We can’t afford to live a life of grudges.  We need the mind of Christ.

*What is going on in your mind?  Are there unresolved things that you need to turn over to God?

Genesis 26:4-5 “I will make your descendants as numerous as the stars in the sky and will give them all these lands, and through your offspring all nations on earth will be blessed, because Abraham obeyed me and kept my requirements, my commands, my decrees and my laws.”

Don’t you hate it when someone else doesn’t do their share of the work and you have to pick up the slack?  That really drives me crazy!  It happens sometimes, though.  For some of you, it happens all the time.  But what about those times where someone else does most of the work and you benefit… score!  We all love that.  Sometimes it takes a lot of hard work to get something started and those that come after benefit.  Those people who come after should feel blessed.

Isaac was one of those people.  God tells Isaac in Genesis 26 that he will be greatly blessed.  Pay special attention to why he is going to be blessed: his daddy obeyed God and kept His requirements, commands, decrees, and laws.  In other words, because Abraham was faithful, Isaac was blessed.  His Father’s righteous life resulted in HIS blessed future.

Parents, you too, can pass on a great inheritance to your children.  I find it remarkable that the promise made to Isaac had nothing to do with Isaac, but had everything to do with the way Abraham lived his life.  What you do NOW matters.  There are spiritual blessings to be passed on; there is a heritage coming that you may not even be able to see.  Run the race, fight the good fight, and stand firm in the Lord… not just for yourself, but for generations to come.

*What promises does God have in store for your children because of YOUR life?